We live in a highly structured, well-connected world, where people are linked to each other via internet infrastructure. A content creator to share happiness, joy, sorrow, bitterness moment & feeling by making & posting videos on social media and video sites has now become common sense. As a gamer, to keep the memory for your chicken dinner in PUBG, to share the aftertaste to your fellows for your Penta kill in League of Legends, or film a fantastic DOOM Eternal walkthrough. All these achievements you want to record to memorize those triumph moments. How to record game video? How does a screen recorder play an irreplaceable role in record game video on PC? And what are their advantages and disadvantages? Let’s go & check them out. 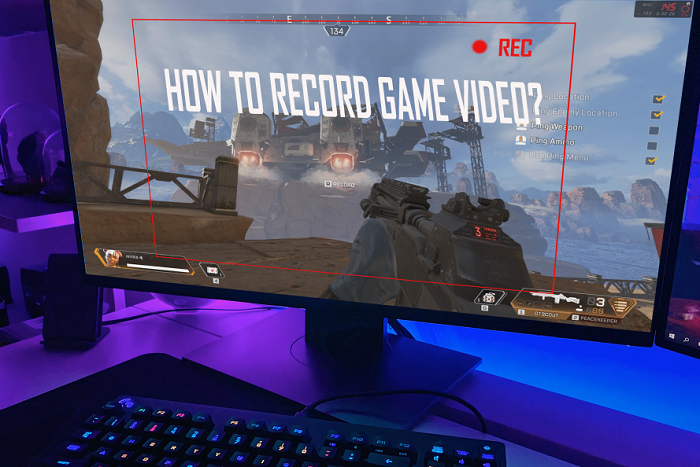 How to Record Game Video with Xbox Game Bar?

Screen recording isn’t a mystery here today. Microsoft added a built-in tool combination in Windows 10, the Microsoft Xbox Game Bar. In order to assist gamers’ effort to record their game video. It has decent support (well, it is good, but not perfect) for users and players who need to record their game video. And some other add-on functions that may use to enhance your gaming experience.

How to use Xbox Game Bar to record a game video

Step 1. As one of the native functions that built-in Microsoft Windows 10, the Xbox Game Bar is pretty much game-oriented and devote to enhance the gamer's experience. Talk about how to record the game video. You can activate the Xbox Game Bar menu by press the key combo "⊞ Win + G", or search in Cortana by typing "Xbox Game Bar" and run the App.

Step 2. While in the game, press ⊞ Win + G, the Xbox Game Bar will pop up to the front screen. The UI design is pretty & awesome. Find the “Record” button with an icon that looks like a white dot inside the circle, click it. Or you can press ⊞ Win+ Alt + G, the recorder will instantly be activated & record. 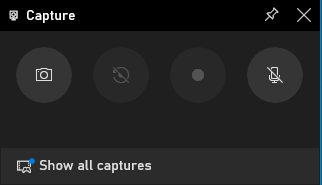 Step 3. A recording timer will show up in the upper left corner. You can stop record game video by click the “Stop recording” button on the panel (a white block in a blue circle). Also, you may disable the sound by clicking the microphone button.

Step 4. After the shot, your videos could be found in the “Gallery” menu, you can manage your recorded game video here as well. 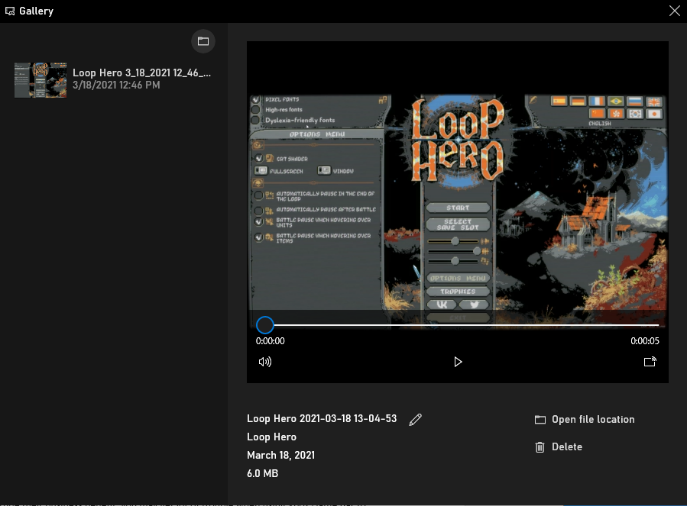 Problems when you record game video with Xbox Game Bar

It seems like a built-in Microsoft function will be a great deal to record in game videos on PC. But, as a matter of fact, it has many problems that cannot be disregarded. 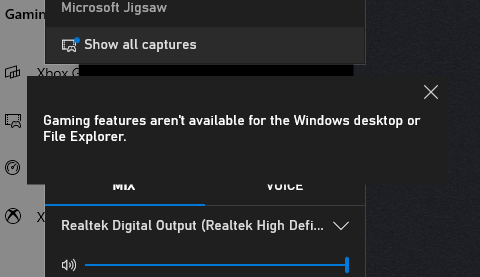 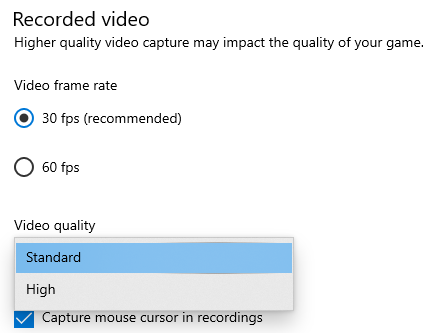 How to Record Game Video with iFun Screen Recorder as The Choice of Functionality?

Since there is a full load of restrictions and limitations, use the Xbox Game Bar to record in-game video is sometimes torture or an incompletable task.

Imagine if you are playing PUBG in the windowed mode, and watching the game guide video on YouTube at the same time. Because of the function restriction of the Xbox Game Bar, neither you can capture the game since the game is running in windowed mode nor you can record the whole screen with the gameplay. If you try to record the screen, there will be a high chance that the Xbox Game Bar will tell you "Gaming features aren’t available for the Windows desktop or File Explorer" for informing you are filming the content that not approved to be recorded.

Fortunately, we’ve got a substitute screen recorder which can help us to record game video on PC. A competent backer that provides a good solution to do the record job without annoying function limitations, the iFun Screen Recorder

Step 1. iFun Screen Recorder isn’t hard to use at all, the UI may not look as fancy as the Xbox Game Bar. But the design is intuitive, and its key functions are listed clearly & reachable. No clustered options shatter on the control panel, No confusion, straight forward to core functions.

Step 2. Make sure you’re running iFun Screen Recorder. You can find five conspicuous buttons that show off the main functions of iFun Screen Recorder on the main interface. Click “Select a region” to define the screen zone you want to record your game (full screen supported). You can adjust the recording zone by justifying the edge of the selection for a better fit to the windows mode game video recording. 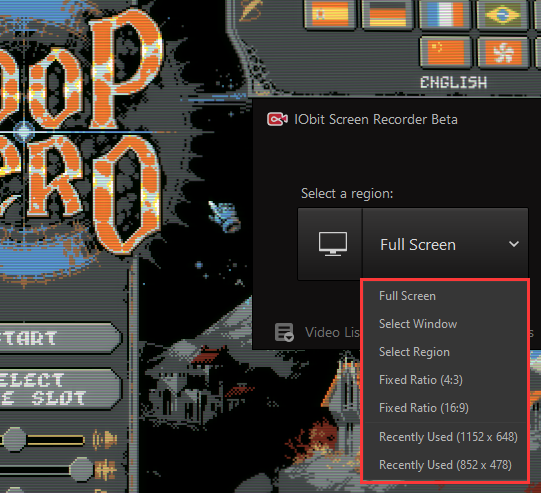 Step 3. In the right, there are three buttons in a row: turn on/off record audio from speaker source; turn on/off record audio from microphone source; show mouse coarser when recording. On the left you could see there is a red “REC” button. Click it to record the screen anytime you get prepared. Keyboard shortcuts are also approved, press F9 to record, F10 to pause, and F11 to screenshot.

The status bar will show off the right-hand corner, you may click the record button to pause, and stop the recording by clicking the red rectangle (Stop recording). The iFun Screen Recorder also allows you to do a screen capture when you recording, by simply click the camera button on the bar.

Step 4. You can manage your recorded game video under the “Video List” tag. You may notice that there are three different formatted videos are recorded.

Step 5. iFun Screen Recorder offered a set of settings that can do complete & detailed adjustments to the recording. It allows you to determine the video format, framerate, audio bitrate frequency... etc. 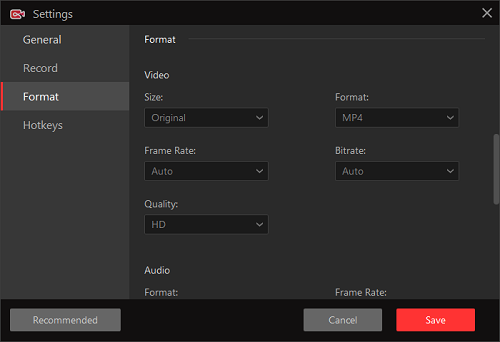 Which Screen Recorder to Use to Record the Game Video? Better Looking or Better Capacity?

Must admit that Microsoft is benefit from its long history of product research & absorption of Xbox series design. There is no doubt the Xbox Game Bar has a cooler visual present than iFun Screen Recorder. Buttons & keys are neatly arranged on the compact dash board, simple icons on black background are perfect examples of flat design.

But on contrary, it’s fancy design may confuse the users & distract their attention. iFun Screen Recorder, on this domain, present a clear and unambiguous guidance to users, that could be a pro that iFun Screen Recorder benefit from its plain UI design.

Both two are doing great on accessibility. They can both activated by press the hotkey combination, the Microsoft has a lead foot since the Xbox Game Bar is a built-in function. On the other side, the iFun screen recorder is also doing perfect, by press F9, F10, F11, you can easily manipulate & control the process of game video record. They are on even for this round.

If we focus on record in game video, and the purpose for recording the most qualified, editable video footage. We shall able to have the chance to manage, to adjust the parameter of the video like video format, video framerate, quality…etc. The Xbox Game Bar doesn’t allow its users to do detailed customization as they need, even adjust the capture zone of the recorder isn't supported by Xbox Game Bar. However, the iFun Screen Recorder supports almost all possible options to record a video from captured screen, even record the screen in GIF format for better sharing on BBS or SNS, those text & image-based online community. From this perspective, the iFun Screen Recorder is undoubtedly having the upper hand in functionality.

In a conclusion, the Xbox Game Bar is preferred as a convenient tool that deals with casual tasks. But without complete functionality, the professional recording/ capturing tasks could not be done by Xbox Game Bar. On the other hand, the iFun Screen Recorder is ought to fulfill the specific need for better game video recording, it provides a complete solution that focuses on the recording quality. To choose one that suits you, to pick up a product that fits your requirement, is the best strategy to get the thing done.