Nintendo Switch is one of the most successful consoles which Nintendo has ever made. Nintendo has sold 80 million pieces of units up to the moment you read this article, surpassed its predecessor 3DS, and the legend is going on. Many masterpieces were released on Switch. You can be Mario, jumping up to finish his odyssey, or you can play as Link, on his travel to save Zelda from Ganon. But did you ever think, to record the best moment of your game, to memory the path you’ve walked through? How to record Switch & Switch Lite gameplay? How would a screen recorder software play its role in recording？Let us explore it further. 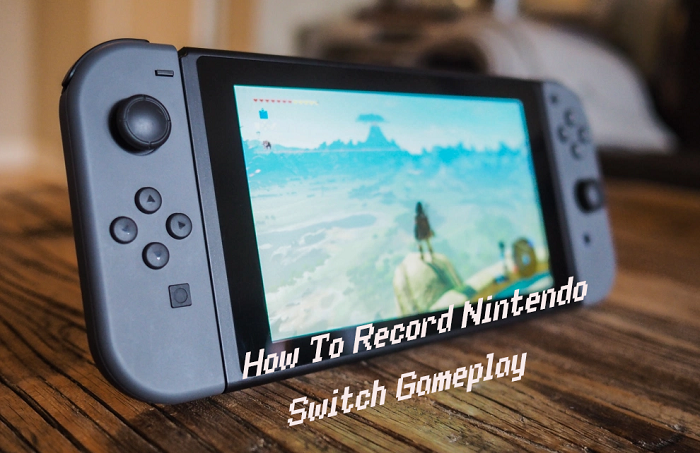 How to Record Gameplay on Nintendo Switch? (With Limitations)

Is there any method to record your gameplay through the Nintendo Switch? Or, can you record gameplay on Switch? Sure, you can, but in condition. The function its self isn’t hard to access at all. Through Nintendo was never famed for its generosity, it has still provided a screen record function to aid in the need for recording gameplay footage.

1.To record gameplay footage, press the “Capture Button” on the left-hand Joycon and hold on for a while. You can also do a screencap by press the button once. The system will automatically record the game footage for the last 30 seconds. 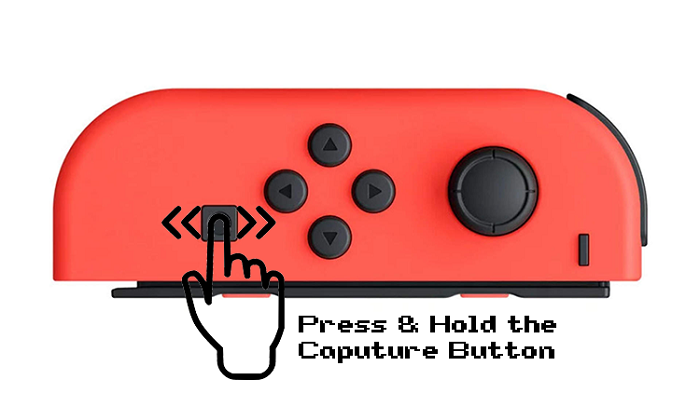 2.The saved videos could be found in the system album. You can access it on the system home screen’s “Album” button, then you can find all your footages & screencaps here. 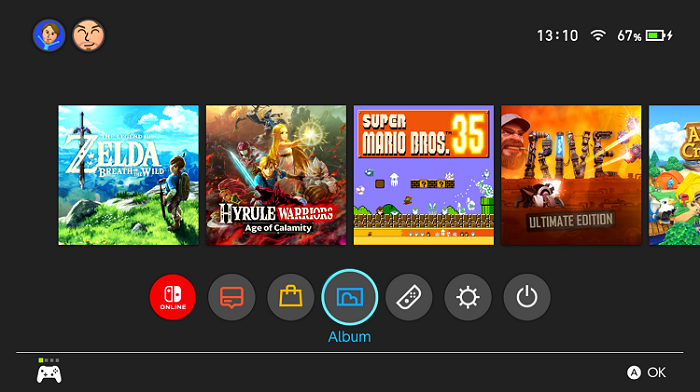 Note: To complete the transferring, you need to have a microSD card and make sure it can contain the videos & screenshots you’ve recorded & captured. Also, an SD card reader that reads & transfers the contents to your PC.

First, we need to copy the video clips and screenshots on your Switch to a microSD. Go to the Switch homes screen and select the small white gear icon to the “System Setting” menu. 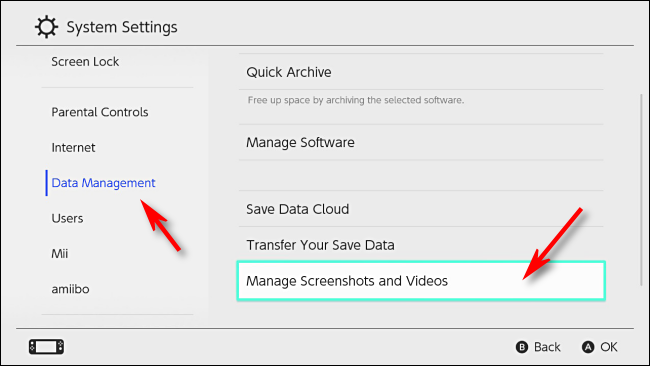 Third, you may choose to copy all your assets to your SD card by selecting “Copy All Screenshots and Videos you’ve recorded with Switch to SD Card”. The system will show you the process and you can skip “How to Transfer Screenshots from a MicroSD Card to Another Device” to finish the transfer. 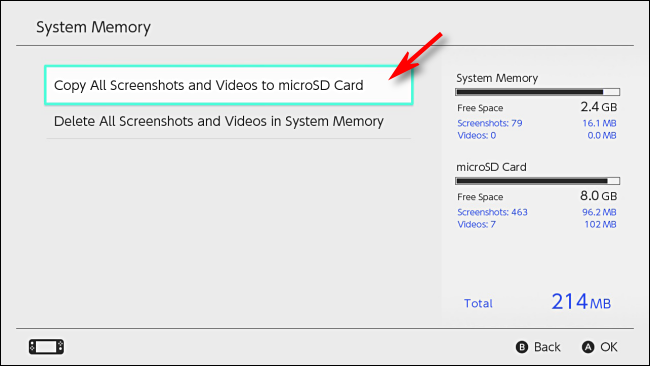 In the last step, You may go to “Album” and highlight the screenshots & videos, press “A” for “Editing and Posting.” A menu will pop up on the left side of the screen. Select “Copy” then you can copy them to the SD card.

This will be the whole process to record Switch gameplay & copy the videos to your PC. It is good to have such a convenient function. But it is not perfect, as the symbolic stingy Nintendo characteristic, there are many deadly restraints.

Problems when you recording switch gameplay on the Switch console.

That means, the great majority, probably more than 99% of Nintendo Switch games, their gameplay can’t be recorded. The rest of the 3295 games are not compatible with the switch built-in video recorder!

For professional gamers & content creators, if anyone wants to make a game guide video or game walkthrough, best moment compilation, or any kind that needs Switch video material to make their own video content, they will need extra assistance to record Switch gameplay video.

A Better Solution: to Record Switch Gameplay on PC.

Professional player needs professional tools, first, we will need a professional tool, the Screen capture card that can cover you to record Switch gameplay on PC. You can find them in the electronic store, BestBuy near you, or Amazon & eBay. 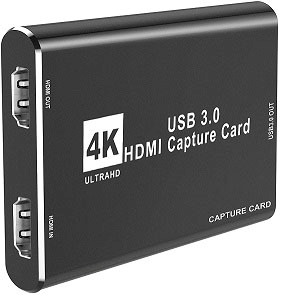 Steps of how to record Switch gameplay on PC with a video capture card.

1.Connect HDMI coming out from your Nintendo Switch to the HDMI input port, then grab another HDMI cable plug into the HDMI output, and plug another end to your monitor.

2.Then plug in the included USB cable into your device and your computer, the device will automatically be detected as USB 3.0 HD video capture and the pop-up will appears in the bottom right corner.

3.To confirm that is working, for now, type into a windows search bar, type in “camera”, go to it and your console will show here.

4.To record your switch gameplay on pc, the last thing you will need to do is to find a proper & stable screen recorder. I would strongly recommend you have a try to iFun Screen Recorder, it is small (100 megabytes), compact (with all functions you’ll need to record switch gameplay), clean (no addon, no malware), and most important point is, it is FREE, no time limitation, no function restriction, plus no watermark on the captured video. Also,iFun Screen Recorder can be your sharper knife to cut through all gameplay recording problems, like how to record Gameplay on PC.

About how to record the captured Switch screen with IObit Screen Recorder, not quite difficult:

1.The UI design of IObit Screen Recorder is intuitive enough, all general functions are presented on the main menu. You can quickly access the functionality you'd like to use to record the game for all kinds. 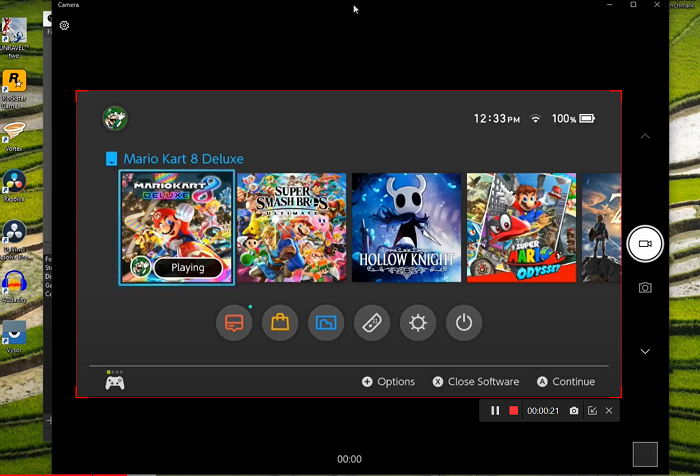 3.Then the record will begin and the gameplay video will be perfectly captured by iFun Screen Recorder. I would strongly recommend you download & have a try at this wonderful freeware.

4. Also, as a general screen recorder, iFun Screen Recorder is highly versatile usage & competent in the various domain: capture video in Windows 10 without restriction; offers the capability of an all-rounded Windows screen recorder to resolve some irritating problems or use it as a productivity tool to record audio on powerpoint...etc

Why did we say record switch gameplay on PC is a better idea?

•    To bypass the 30 seconds recording restriction. Use a PC to record Switch games is the only way to bypass the Nintendo recording time limitation.

•    To record all Nintendo Switch game lists. Your content will be expanded dramatically and not limited to only four games.

•    To save your recorded video easily. Avoid complex steps that Nintendo setup to cumber you in storing, editing, or posting your personal video.

We would like to see more people can notice there are many tricks about how to record their Nintendo Switch gameplay, not only because we love the games, but we want to see more players can share their happiness and joyful moments with the community, enjoy the time when creating fantastic video, to post your video publicly gain more recognition, keep the experience as the step towards the best… Without PC hardware & software support, like a decent screen recorder, your talent & inspiration would never be achieved. That’s why we’ve talked a lot about how to record switch gameplay on PC, we just want everyone to share the joy of playing, creating & sharing.